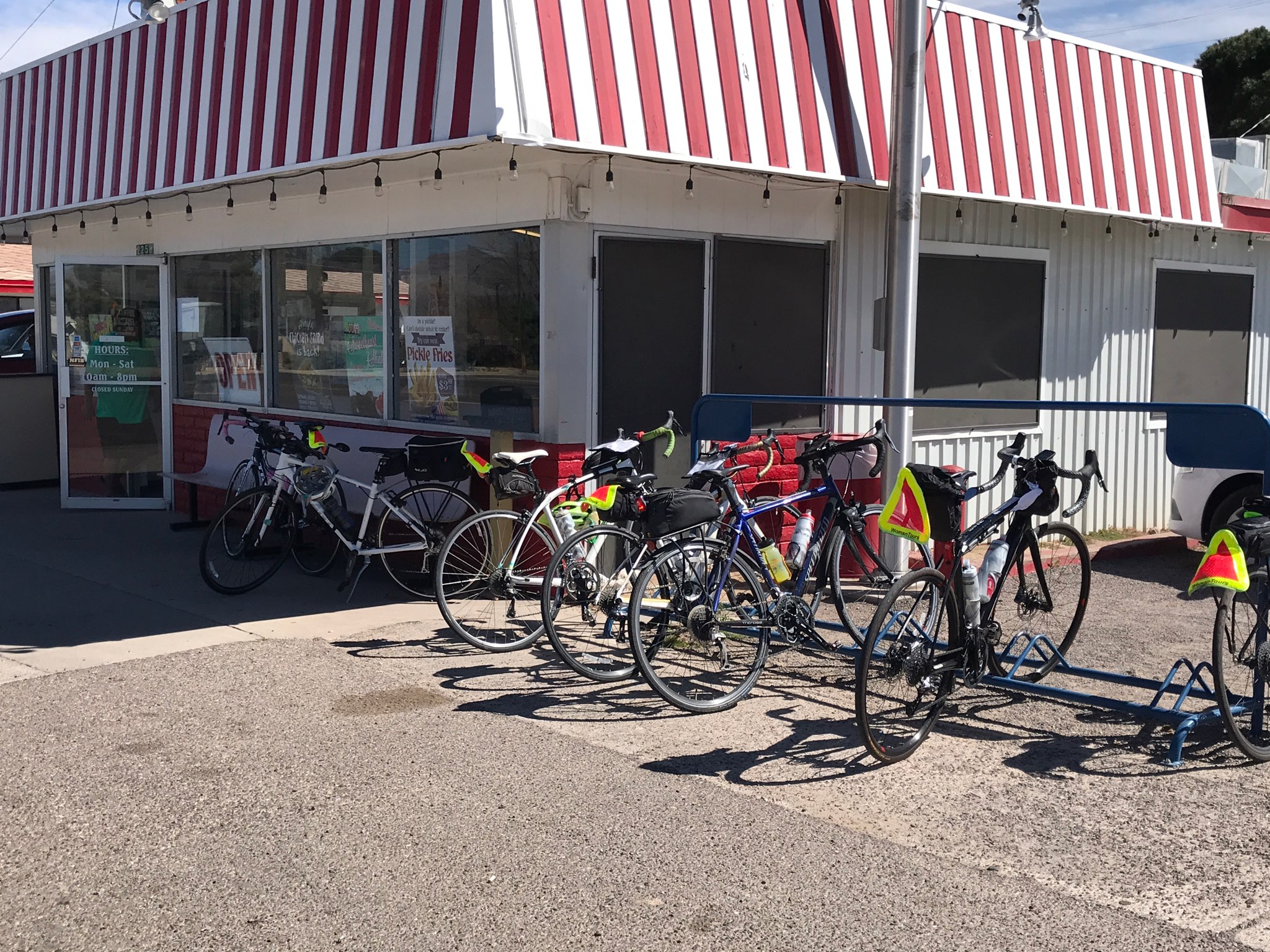 We are at the mercy of these contraptions carrying us across the country. Each of us has a bike, and they all have two wheels, a handlebar and a seat. That’s about all that they have in common. There are hybrids with straight handle bars, a tri bike with Zipp wheels and a bike with aero bars. Some bikes made from steel, some carbon bikes and some aluminum bikes. Most bikes have sleek seats but a few have more gel in them. Most riders use clip in pedals of one sort or another but some riders wear sneakers and have flat pedals. Like the women of this trip, our bikes come in every shape and size.

Some days the beasts slow us down or drive us crazy. We have all had to deal with some mechanical issue or another.

By far the most common issue we have is flat tires. The road is capricious. Doesn’t matter the type of tire, bike, most of us have had at least one flat, one person has had nine (she is now an expert tire changer!) and she has the sweetest ride with new road tough tires.

We either came on tour knowing how to change a tire or have taken lessons since starting the trip. The guides are teaching us to be self sufficient bikers. Or resourceful as one of them would say.
My flat was an easy one. I have self sealing tubes and ran over some glass on my way to Tonto Basin in Arizona. I was alone on a long hard climb and I heard the tube burst and the spurt of air as the tire leaked. But the self sealing worked and the tube sealed back up. I jumped off, pumped some more air in the tire and headed for the SAG wagon a few miles up the hill. Better to have company than change the tire alone on a cold mountainside.

Even though I had changed a half a dozen flats in the few months before the ride my skills slipped away in the freezing wind and it took group think to decide the best strategy. I thought it was risky to ride another 25 miles on the tube, it seemed to be still leaking air whenever something pushed up on the hole in the tire. So changing the tube was in order. The tire itself had a nice gash but not lethal. I decided to use the dollar bill trick that I had heard of but never used and been telling others about since the beginning of the trip. The boot (as I have since learned it is called) is when you have a gash in the tire and no new tire handy, you take a dollar bill or an empty Gu packet and put it inside to cover the gash. With some help from friends who were smart enough to suggest I hide from the wind behind the car to change the tire, and who helped me hold things together as I worked, I got a boot in and rode on.

Other mechanical issues have come up along the way. I rode for 125 miles with whining coming from somewhere between my feet and it wasn’t until I was smart enough to think to take a video and send it to my bike mechanic and a friend that we figured out what it was. The best reply to my video plea for help was from my buddy Jonathon, “We've had a group meeting: five bikers, a doctor and a small dog, all decided that it's not good. Sounds like a bottom bracket, you can't do that yourself. Need a bike shop at your next day off. But it's not that bad. You can ride. Use oil between inside big cog and bottom bracket. Because of the rain. Needs grease.”

I added oil. On the rest day, the mechanic’s official diagnosis was that the ball bearings in the bottom bracket were crunchy. Replacement done for roughly $75 dollars, including a new lube job and I was back on the road. Smooth as silk since.
I kept the boot in, the rest of the tire is fine. A roommate had superglue, so we squirted some in and it has held.

Other riders have had cleat issues, seat issues and derailleur issues. One day, a good rider had her front derailleur stop working. She rode 80 miles in her middle gears. You gotta respect that. That night she was able to get it “working” until she too could get to the Silver City bike shop.

Now a week later and over a thousand biking miles each, the boot trick has gotten used a few times by others. We share the fixes that keep the beasts spinning. I love the community of that.

In the picture, the beasts waited patiently for us while we stopped for root beer floats. We enjoy the days when we are riding and it feels like we are flying the beasts.

About MJM
Arizona
The adventure begins. I'm preparing to bike across the United States. 3100 miles in 50 riding days. Come along with me...while I train, wander and search for chocolate.
Previous Post : Does anybody know what time zone we are in?   Next Post : The prelude is over...