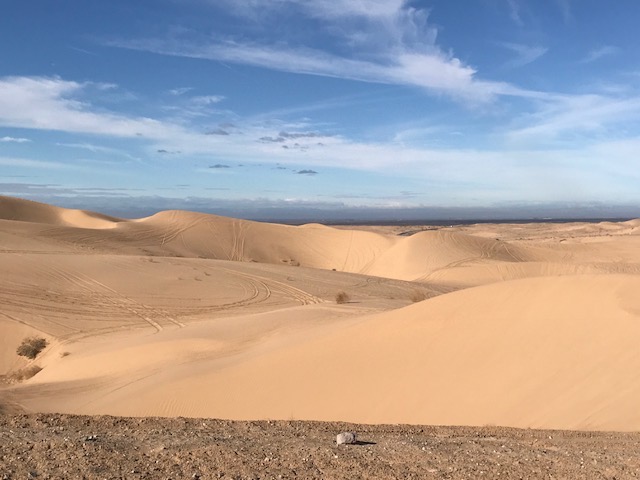 I’m not an every fine inch person. I didn’t think I was but yesterday confirmed it. It was after a beautiful morning riding towards the Chocolate Mountains and along the Imperial Sand Dunes.

"Imperial Sand Dunes, sometimes called the Algodones Dunes, are the largest mass of sand dunes in California. This dune system extends for more than 40 miles along the eastern edge of the Imperial Valley agricultural region in a band averaging five miles in width. Rising to heights of over 300 feet above the surrounding desert floor, the dunes are a well-known landmark to local residents and the thousands of highway travelers who pass by them every year. While summer temperatures often rise above 110°F and annual rainfall averages less than two inches, the mild climate between October and May attracts tens of thousands of off highway vehicle (OHV) enthusiasts to the area. (from the DesertUSA website)"

We biked to lunch and then we were scheduled to ride a stretch with no shoulder.

Marty and I drove this way on the way from San Diego and talked about the lack of shoulders. Well, Sunday noonish coming out of the park were lots of RV’s with toy haulers or pickups with trailers loaded with ATV’s (or OHV as they are referenced above). It looked to me like they were taking up every inch of the road. So after lunch, I bumped. I got a ride beyond the area with no shoulders and started again. A nice 20 more miles to the hotel in Blythe.

The ride across the country only works for me if I’m still around to talk about it in St. Augustine. I also chose to skip the stress. If it had been a Tuesday I might have made a different decision. Everyone else made their own choice and everyone made it through fine. 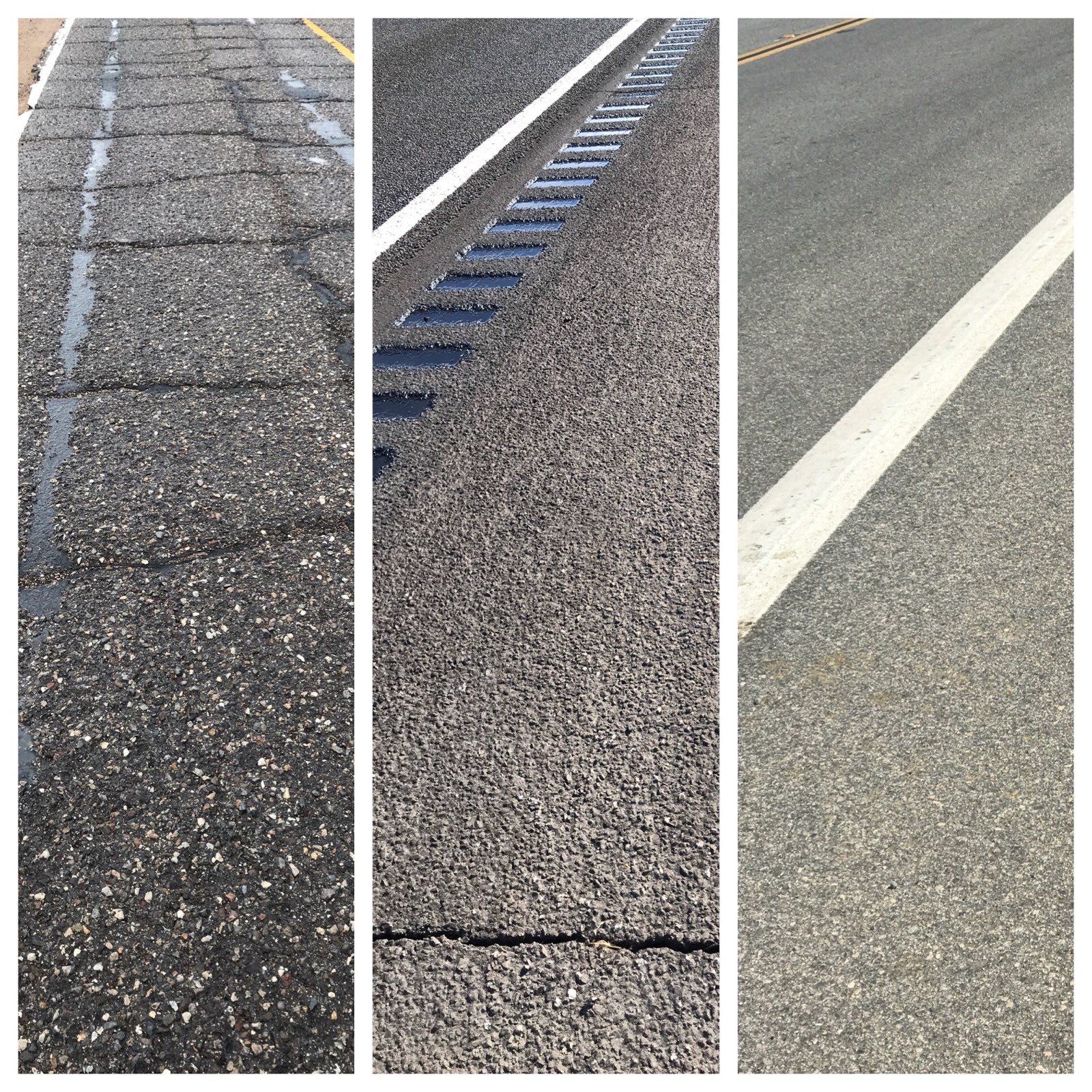 On the farthest left in the picture, is my 8-10 mile an hour road. One of the women on the ride said, that is a picture of the good section of that road, you didn't get the really bad parts! The 8-10 mph road is either a shoulder covered in gravel or a road shattered to bits. We road seven or nine miles on this. Our route was taken from Adventure Cycling’s maps and this is part of the tour, so no option (except to bump). I joked that it was like getting on the machine in the gym with the band that jiggles you and makes your fat fall off. Although no evidence of that so far.

The middle segment of the picture is the 12 mile an hour road. We spend lots of time each day on this kind of shoulder. It is rough chip seal. The cheapest road to lay down and the cheapest to maintain. They pour tar on the road and then toss gravel on top of it. You also feel these roads by the end of the day. On days filled with chip seal shoulders as I slide in bed at night I notice my skin is tender to the touch.

And the last segment of the picture is the “ahhhhh” road. The road you end up on at some points during the day where the rattling of every muscle ceases and your whole body unclenches. You relax. That is my 14-16 mile an hour road.

I’m not surprised my shoulders hurt today. Riding on rough shoulders and roads, everything but my legs hurt. Thankfully today is a rest day in Blythe, California. Blythe is a small town off Interstate 10 between LA and Phoenix. It is only about two hours from home so I got a Sunday visit from my guy.

My first rest day was breakfast, bike cleaning, lunch and laundry. I’m now wondering where to go for dinner. Are you sensing a pattern here? Four or six hours on the bike a day burns lots of calories.

About MJM
Arizona
The adventure begins. I'm preparing to bike across the United States. 3100 miles in 50 riding days. Come along with me...while I train, wander and search for chocolate.
Previous Post : Routines   Next Post : Tattoo Tina